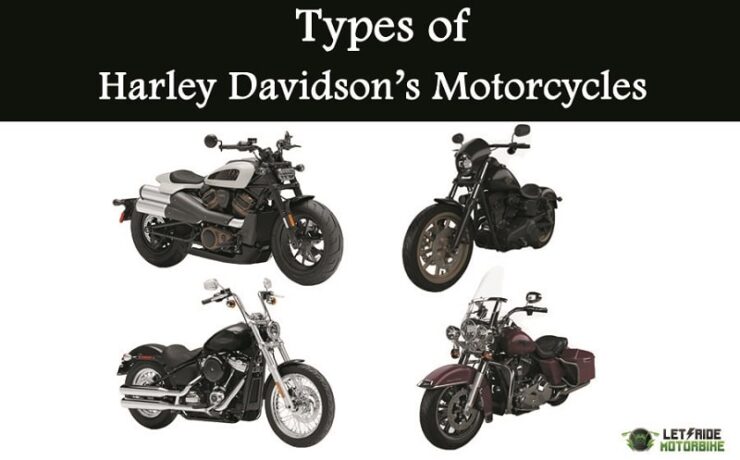 Since its founding more than a century ago, Harley Davidson has manufactured fantastic models and types of Harley Davidson’s motorcycles discuss in below. Although some of the Harleys are almost erased from memory, others are impossible to forget. Harley Davidson’s influence in motorsport is so significant that he is called the “American motorcycle.” It is important to note that the company has produced many motorcycles over a hundred years, and choosing the top ten models is entirely subjective.

The company was one of only two major American motorcycle manufacturers that survived the Great Depression. It has experienced a change of ownership, periods of poor product quality, and economic decline withstood the most robust global competition, and entered the top five of its largest motorcycle manufacturers. Moreover, it created a truly cult brand, and everyone has heard about Harley, even if he is not interested in motorcycles. Harley Davidson is also known for customizing: hand-assembling, reworking, and painting motorcycles to the customer’s taste, which led to the emergence of the chopper style.

The company promoted heavy air-cooled cruiser motorcycles with an engine displacement of over 700 ccs, then expanded the range of services, offering lighter and more modern bikes of the VSRC family.

Typically, Harley Davidson models are equipped with a 45-degree V-twin engine. There is a single pin on the crankshaft, and both pistons are connected to the plug by connecting rods.

Here are the top models ever. 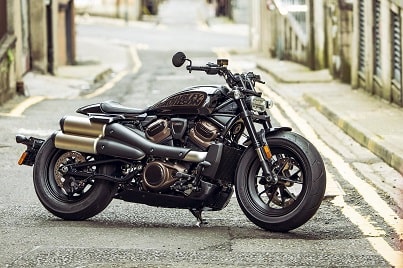 The Sportster is considered the most affordable Harley Davidson, and in terms of dimensions, it is the most miniature motorcycle among the Harleys. A classic bike, produced for a very long time, since the beginnings, starting in 1957. Since then, this series has participated in various races; it is one of the best classic motorcycles. The photo below shows what the modern Harley Davidson Sportster looks like now.

Structurally, the motorcycle is very simple; it has a V-shaped 2-cylinder engine. There are different sizes of engines, starting from 883 cubic meters, ending with 1200 cubic meters.

Today you can find 7 varieties of Harley-Davidson Sportster; there are no significant differences in them, the body kit and exterior design differ slightly. These are the varieties of Sportsters:

The main distinguishing features of this series of motorcycles are:

Sportster does not belong to either choppers or cruisers. It is a classic compact motorcycle; you should learn how to ride a Harley Davidson from such a motorcycle. You can look for motorcycles in the secondary market; they will be much cheaper. 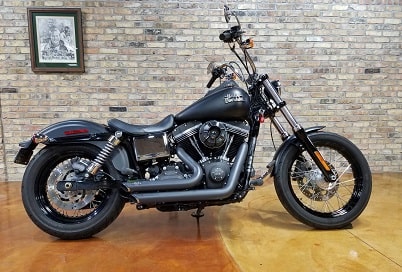 The Dyna Harleys series comes from the name of Daytona from the state of Florida. This city is famous for racing both on cars and motorcycles, lovers of various motor vehicles gathered here.

The dimensions of Dyna do not differ much from the Sportster, but in Dyna, the motor is more powerful; in addition, the engine is mounted on the frame with silent blocks, and during driving, it vibrates. This creates the feeling that the bike is alive. Many bikers are delighted with this feature of their motorcycle.

Today there are 5 models in the Dyna series, and the differences between them are also not significant. These models are:

Its removable saddlebags and windscreen distinguish the Dyna Switchback.

A distinctive feature of these bikes is the speedometer on the gas tank, and the rear shock absorbers are also visible on the Sportster. And under the saddle, there is an angular battery box.

The Dyna series is quite rare on roads because their price is significantly higher than for the Sportsters; besides this, Dyna is not the fastest and not the most prestigious Harley Davidson motorcycle. The cheapest is Street Bob, and the most expensive is Lowrider In America; motorcycles of this series are quite popular. 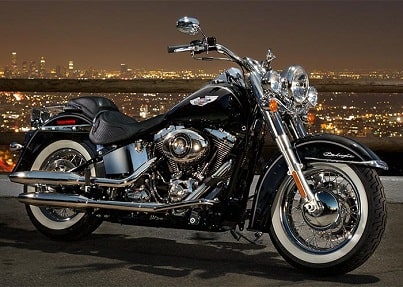 The largest and most diverse family of Harley-Davidson motorcycles is the Softail. Now it unites more than a dozen models. Why so much? Some of the iconic bikes that used to be part of the discontinued Dyna family have been redesigned for the Softail platform. This refers to Harley-Davidson Street Bob, Fat Bob, and Low Rider. All of them now belong to “Softails.”

Where does this strange name come from? What does the “softail” have to do with it? The bottom line is that if you look at any motorcycle from this family from the side, the rear shock absorbers are not visible. One gets the full impression that this is an old motorcycle with a so-called dry frame, to which the rear wheel is rigidly attached, without shock-absorbing elements. Nevertheless, they are – just thanks to a cunning kinematic scheme, they were able to hide deep into the motorcycle, under the saddle. As a result, the “tail” turned out to be really “soft”!

By the absence of rear shock absorbers, you will always recognize at first glance a motorcycle of the Softail family, whatever model it may be—starting with classic city bikes like Street Bob and Fat Bob, continuing with Sport Glide and LowRider cruisers, and ending with almost a Harley-Davidson FXDR sportbike. There is even a “vintage” model – Softail Deluxe. But from a technical point of view, they are all very similar – one platform and a different attachment.

We will not delve into such trifles as the different inclination of the front forks and, accordingly, the different wheelbase. It is worth mentioning only the fact that all “Softails” is equipped with “big” V-twin (Big Twin) engines of the Milwaukee-Eight series with a volume of 107 or 114 cubic inches (1746 and 1868 cubic cm, in our opinion). Here everything is already real, American, inch! By the way, the number eight in the name of the Milwaukee-Eight series engines means the number of valves – four for each cylinder. 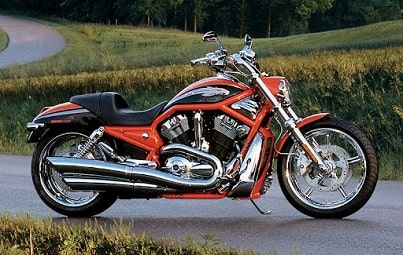 VRSCSE2 combines excellent functionality with a striking look and comes in three color combinations: charcoal slate with pearl scarlet, platinum pear with chrome and pearl yellow, and black with bright orange. In addition to superb steering, the bike has a Revolution engine that makes it easy to maneuver in heavy traffic. 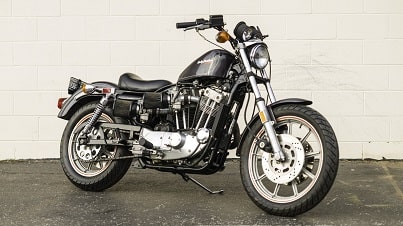 The efficient and powerful XR-1000 was a staggering $ 7,000. Not everyone could spend so much money on a motorcycle. The lucky few who could afford it enjoyed the mighty 998cc engine, squeezing 180 km / h out of the bike. Despite its fantastic performance at the time, the XR-1000 was not particularly popular, but its racing version called Lucifer’s Hammer helped Jay Springsteen win the race at Daytona. 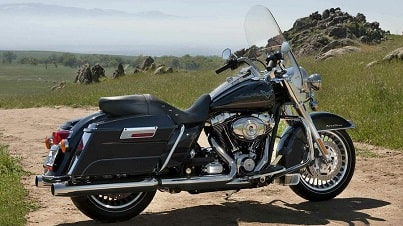 The 2012 FLHR lives up to its name in performance and customization and is the king of the road. This was achieved thanks to installing a Twin Cam 103 engine with a displacement of 1690 cubic centimeters and a 6-speed gearbox. The model uses an anti-lock braking system and electronic cruise control. In terms of tuning, the bike comes with an adjustable rear suspension and a removable windshield to help ensure a smooth ride. The “King of the Roads” has a classic body design, synonymous with the image of bikers. 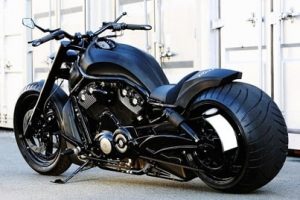 The V-Rod series are considered the fastest and most powerful Harley Davidson motorcycles. Even Porsche engineers took part in the creation of this series.

There are only 2 models in this series: Night Rod and Muscle.

The Night Rod is a classic V-Rod designed to maximize speed; engineers have worked to lower the center of gravity. A new engine was developed, in which the camber angle of the cylinders began to be 60 degrees, and in classic Harley Davidson engines, the camber angle is always 45 degrees.

In addition, to further lower the center of gravity, the engineers put the gas tank under the saddle, and in place of the gas tank, there is a conventional fairing that covers the air filter. The result is a Harley Davidson motorcycle that has excellent stability on a straight road and in corners.

The second model, the V-Rod Muscle, differs from the Night Rod in that the Muscle has exhaust pipes on both sides, while the Night Rod has 2 mufflers on one side. Also, the external design is slightly different for these models.

The V-Rod can be identified by the radiator installed in the front, Softail, Dine, and Sportster; there is no radiator because their motors are cooled from the air while driving. And here is the engine in a V-Rod with a liquid cooling system, just like in a car. Such tricks had to be taken to increase the power of these motorcycles; in the V-Rod, it is 120 hp. With. And the more power, the more efficient the cooling system should be. 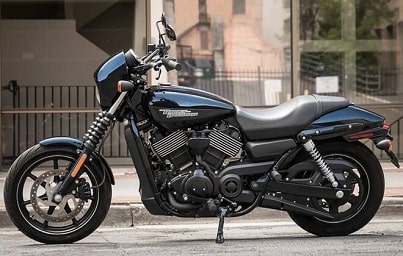 The youngest Street family. Incidentally, the only one currently produced outside the United States is in India. And Harley-Davidson Street, firstly, is metric (meaning fasteners), not an inch, which means that a lost screw does not have to be ordered from abroad but can be picked up locally. Secondly, it has a water-cooled motor. For an Orthodox Harley player, this isn’t very good! Therefore, many of them do not consider Street as a “Harley.” It would be possible to leave everything as it is, if not for one “but”: Harley-Davidson itself often forgets about it, pointing out in its press releases that the company is engaged in the production of extremely heavy motorcycles – cruisers.

But Street isn’t heavy and not a cruiser at all. This is a lightweight city bike built from scratch and has nothing to do with all other company models. Well, except for the nameplate. However, Street is an excellent choice for girls and beginner riders. It has a good 750 cc engine (by the way, this is one of the very few models from Harley-Davidson, in which the engine displacement is indicated in the usual cubic centimeters, not inches) and relatively sane brakes.

The easiest way to recognize Harley-Davidson Street is its miniature size and 750 numbers on the air filter housing, on the right in the direction of travel. If you take a closer look, you will probably also notice a large water-cooled radiator – on the other company models; it is not. 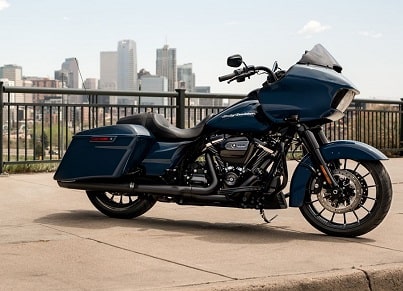 The Touring is considered the flagship family of Harley-Davidson models. As the name implies, this is when you need it far and for a long time. These motorcycles were originally designed to cover great distances. And with maximum comfort. Any Touring in the eyes of an uninformed observer is “a huge motorcycle with suitcases.” Suitcases, or, more correctly, trunks, are essential. They can be semi-soft leather or hard plastic. There can be two of them – on either side of the motorcycle – or three. This is not very important. The main thing is that they are always there. There is no “Touring” without wardrobe trunks. If you see an American policeman on a motorcycle in a movie, then you can be 99% sure: he has a Harley-Davidson Touring!

There are eight models in this family, and they are divided into three subgroups. If the model’s name contains the word King (for example, Road King), we are talking about a classic cruiser decorated in retro style and devoid of any plastic fairings. However, a clear windshield may be available but not required.

Touring models with a large plastic fairing in the front usually carry the word Glide in their name – sliding. If this fairing, along with the headlight, is attached to the front fork and turns with the handlebars, it is a Street Glide. If it is firmly attached to the frame and always stays in place, it’s the Road Glide no matter how you turn the steering wheel. By the way, the model is still easy to recognize by its characteristic twin headlight. On both Road King and Street Glide, the headlight is the same – round.