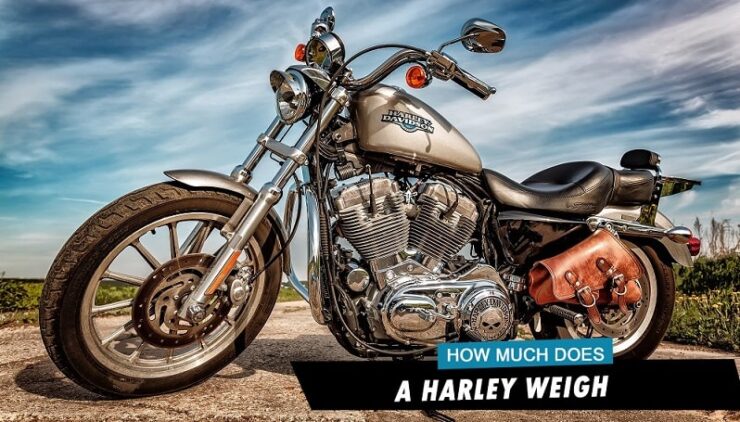 Harley-Davidson motorcycles have a reputation for being brutal for true road connoisseurs for a long time. These bikes delight with their impressive appearance, and the powerful V-shaped two is an integral part of them. Currently, the Milwaukee-based company produces a relatively wide range of models designed for different operating modes. But they all carry the signature charisma that gives Harley-Davidson motorcycles a unique personality.

The Harleys’ lineup includes several lines of bikes that differ in class and layout. Several motorcycles are presented within each of them, with different configurations, equipment, motors, and appearance. This material is intended to help you understand the current Harley-Davidson lineup.

How Much Does a Harley Weigh

Harley-Davidson Street is the youngest line in the company’s lineup, the most affordable for buyers. These bikes are not exactly what the general public associates with “Harleys,” as they are an intermediate link between road and sports bikes. Their target audience is active people who use a motorcycle for everyday city trips. As they used to imagine, the likelihood of seeing a harsh bearded biker driving such a car tends to be zero.

Only the engine indicates that Harley-Davidson Street belongs to the plant of the company from Milwaukee. The motorcycle is powered by a water-cooled Revolution X engine with a proprietary V2 configuration, but its volume is ridiculously small compared to its “big brothers” – just 500 or 750 ccs. The older engine modification, installed on Harley-Davidson Street and Street Rod, is presented. The latter is distinguished by a higher seating position, emphasized by a sporty appearance with a straight steering wheel and slightly raised torque.

In the regular version of the Harley-Davidson Street, the 750cc engine produces about 60 hp power, at 59 Nm of torque. The Rod modification has a slightly more powerful engine, producing up to 65 Newton meters and R17 wheels at the front and rear (in the regular model – R17 and R15). Both versions of the bike weigh a little more than 220 kg.

The Harley-Davidson Sportster series is represented by road bikes that have many of the company’s touring signature traits. Belonging to the Milwaukee brand in this line is much more pronounced; in particular, the bikes delight with an abundance of shiny elements and have a massive “body,” although the wheelbase length relative to the ride height is also not very great.

The Harley-Davidson Sportster series motorcycles are equipped with two Evolution air-cooled V-twin designs. Their working volume will already be more serious – 883 or 1200 “cubes.” The manufacturer does not officially name the power of the motors, indicating only the torque. For the 883-cc version, it reaches 69 Nm, for the 1.2-liter – up to 96 Nm.

A variety of motorcycles represents the Harley-Davidson Sportster range. The Superlow is equipped with an 883 cm3 motor. It features a low stance, good low-speed maneuverability, adjustable rear suspension, and powerful disc brakes. The bike’s design is replete with shiny chrome elements, so it’s pretty easy to identify a Harley.

The Harley-Davidson Sportster Superlow 1200T modification is equipped with an enlarged engine. She carries all the model’s features with a smaller engine, differing from her mainly in the presence of side trunks for carrying luggage. The motorcycle is designed for fans of longer trips.

The Harley-Davidson Sportster Iron is available in 883 and 1200 cc versions; these modifications also differ in the steering wheel. The younger one is more straight, athletic, and in the older one, it is elongated, with a characteristic U-shaped bend. These bikes have less chrome, most of the elements are black or gray, but the distinctive saddle and handlebars emphasize the Milwaukee style.

The Forty-Eight motorcycle is available in the Harley-Davidson Sportster range for connoisseurs of classics but in a sporty spirit. It is equipped with a proprietary 8-liter drop tank that has not changed its shape for 70 years. Additionally, the bike is equipped with a 1.2-liter engine, cast wheels with wide rubber, adjustable rear shock absorbers, and powerful disc brakes. The abundance of black emphasizes the motorcycle’s sporty character, while shiny details (heads, valve tappets, exhaust, forks, etc.) complement it harmoniously.

The Harley-Davidson Sportster Custom 1200 is a classic road bike designed to enhance the rider’s personality. It is equipped with a 1.2-liter engine, wide saddle; wide rubber spoke wheels, adjustable rear suspension, and disc brakes. The bike is an example of the fusion of modern ideas and classics.

The Roadster model closes the Harley-Davidson Sportster range. This is a bike designed for those who like to drive in the city or on the track, capable of taking off with a bullet and picking up speed. It features a teardrop-shaped tank, a low steering wheel, and a pronounced sporty design. The motorcycle is equipped with two-disc brakes for effective braking when driving from traffic lights to traffic lights.

Harley-Davidson Softail series motorcycles are a successful attempt to use modern technology while maintaining a classic look. Wanting to bring the look of the bikes closer to the retro models with a “dry” frame (without a swingarm and shock absorber at the rear), but to maintain modern comfort and reliability, the engineers resorted to using a mono-shock absorber hidden under the saddle.

This line’s motorcycle is equipped with Milwaukee-Eight motors with a displacement of 107 or 114 cubic inches (1745 or 1868 cc). A notable feature of the engines is the use of 4 valves per cylinder for the first time in the company’s history. To damp the engine’s vibrations, which are rigidly suspended in the frame, the motors are equipped with two balancing shafts.

The Harley-Davidson Softail series is precisely the bearer of the corporate spirit; it is by its representatives (like the Touring or CVO models) that the brand is known to the general public. After all, “Harleys” is primarily associated with massive bikes with a low stance, massive rear wing, large V-shaped two, and great chrome details. Arnold Schwarzenegger’s hero drove on a motorcycle of this particular series (“Fat Man” model) in the second part of the cult film “The Terminator.”

The youngest in the series is the Harley-Davidson Softail Street Bob, equipped with a 107 cubic inch motor. There is not much chrome in it, but it does have spoked wheels, a low saddle, a U-shaped steering wheel, and a massive rearguard, in the best style of engineers from Milwaukee.

The Low Rider belongs to a higher class – this motorcycle has a classic shape, chrome-plated wherever possible, equipped with alloy wheels and a 107 cc engine. For connoisseurs of modern classics, this is one of the best options.

Harley-Davidson Softail Fat Bob is a more massive and brutal bike that combines classic and modern. Shiny chrome has become less in the latest generation, but the teardrop-shaped tank, a powerful engine of 107 or 14 cubic inches, and a comfortable steering wheel have been preserved. The wheels emphasize the brutality of the bike with very thick tires.

The Sport Glide is an example of what a sports classic should look like in the bike world. The motorcycle combines traditional outlines with aggressive elements that hint at it: it not only knows how to drive along the track but can also “shoot” at traffic lights. Fortunately, a 1745 cubic meter engine with a thrust of 145 Nm allows this.

Softail Slim is another bearer of the traditional look. And do not be confused by the name; this “baby” in the equipped form weighs more than 3 centimeters. A drop tank, spoked wheels, massive rear fender, wide fork, and large tailpipes are the main features of this model.

The Harley-Davidson Softail Deluxe is similar to the previous model but even heavier and closer to the classic. Here you have a teardrop-shaped tank, massive fenders in front and rear, and an abundance of chrome and spoke wheels equipped with tires with “whitewall.” The standard of “Harley” and there is nothing more to say here.

Model Breakout represents power and road speed. The bike is made in the spirit of the classics, but at the same time, it can please with its speed, controllability, and comfortable fit. The rear wheel has a tire of an impressive 240 mm width, providing the best contact with the road at any speed.

Another model aimed at those who like to climb the miles is the Fat Boy. “Fat Man” is famous for filming in “Terminator” and for its classic look, an abundance of chrome, and a powerful engine. A drop tank, solid alloy wheels, massive guards, and a thick fork show that this bike is designed for the true kings of the road.

The Heritage Classic is a model aimed at lovers of classics and long journeys. The bike’s design is distinguished by the familiar shape of the tank, fenders, and an abundance of chrome. Also, the wide saddle, comfortable steering wheel, wide tires, saddlebags on the sides, removable windshield, and bright lighting are responsible for comfort and safety on the road.

Harley-Davidson Touring Motorcycles are designed for those who are asked, “Will you drive 1000 km in a day?” answers not “yes” or “no,” but something in the spirit of “Where are we going and when are we going?” They are designed for long-distance travel and are equipped with everything you need for this. The bikes are characterized by a comfortable low fit in a wide saddle, a spacious tank, front fairing, and luggage cases in the back.

The powerplant in the Harley-Davidson Touring is the same eight-valve Milwaukie-Eight. For comfort on the road, in addition to the seats, they are responsible for a dynamic suspension, a multimedia system, and safety is provided by double-disc brakes.

Size is a moot point. The answer to the question about the meaning of the size may be different, depending on your choice – “more is better,” “small is beautiful,” or “the main thing is a skill.”

But when it comes to bikes and weight, in particular, the conventional wisdom is usually “less is more.” Bike makers will constantly brag about a 17-gram reduction in weight for some invisible component deep inside the engine. Still, you will never see statements like, “Look, our bike is heavier than everyone else!”

Unfortunately, picking the ten lightest bikes on the current market will lead to a top-down list of scooters or mopeds. So instead, we made a list of “fatties.”

The 385kg curb Road Glide weighs the same as the Penguin AGM-119B anti-ship missile or about as much as an adult Caribbean leatherback turtle.

The sparkling £ 28,630 CVO Street Glide stands out from its less ostentatious siblings in part for its sassy looks and partly for its ridiculously powerful sound system with a pair of 300-watt amps. So it makes sense that it weighs as much as the AeroDream One, the world’s craziest iPod music dock at £ 399,000, as shiny, loud, and not quite practical as Harley (what to do with iPod docking, you need to climb the stairs).

Not the biggest surprise, but there are several Harleys in the Top. The Electra Glide Ultra Classic, slightly short of 400 kg, turned out to be precisely equal in weight to one blade of the Mi-26 propeller, the world’s largest mass-produced helicopter. In fairness, one should not forget that the helicopter has eight such blades, but again it weighs 28 tons and can carry another 20 tons of cargo. Holds 50 pieces of Electra Glide Ultra Classic.

The Roadmaster may be as heavy as a rocket engine, but the Harley Ultra Limited weighs as much as an entire aircraft. Actually. 414 kg is the mass of the Genesis space probe [controversial moment, it was not possible to verify it], which flew 1.5 million km towards the Sun and collected solar wind samples from 2001 to 2004. Unfortunately, upon returning to Earth, the probe’s parachute did not fire, and it crashed into Earth at 311 km / h – seemingly as fast as the Ultra Limited under the same conditions.

And the biggest of all the big ones is, of course, Harley again. The curb CVO is the largest bike in the company’s lineup (with the same heavy price tag of £ 29,130). 439 kg is about 70 stones [probably only the British will understand the scale], the same as weighed at its peak.