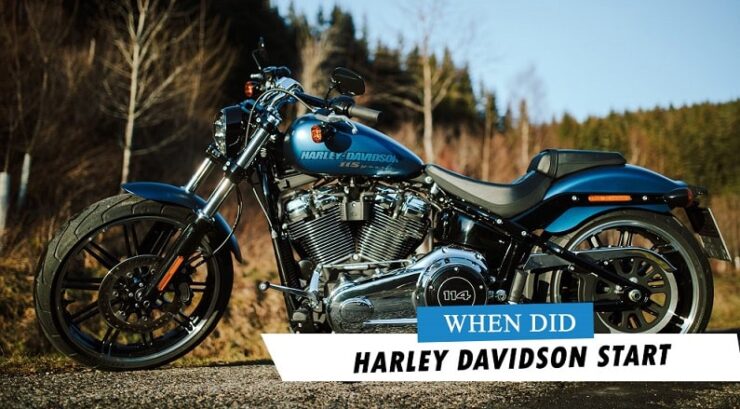 Harley-Davidson is the most famous motorcycle manufacturer in the world. The legendary company has managed to create a culture of its own, centered on its reliable and largely revolutionary motorcycles. We’ll discuss when did harley davidson start in this article below.

Harley-Davidson is based in Milwaukee, Wisconsin, USA. Its story began in 1901 when 21-year-old William Harley designed a small motor for a bicycle. For two years, he worked with friend Arthur Davidson to create a motorized bicycle published under the name Harley in 1903.

The bike was meant for racing. It was collected in a small shed with an ambitious “Harley-Davidson Motor Company” sign. Engineer Walter Davidson, Arthur’s brother, also joined the work. However, their brainchild was not distinguished by either a reliable design or a decent power reserve: it was impossible to climb a hill without the help of pedals. So the Harley and Davidsons decided to design a real motorcycle.

In 1903, the first successful sample appeared. It received a 3-horsepower 405 cc engine with an automatic intake valve and a reinforced frame; in the lower part, a loop-shaped curve allowed the engine to be lowered, thereby lowering the center of gravity. The design of the first motorcycle did not change for several years.

When Did Harley Davidson Start

In 1904, the first Harley-Davidson store opened and immediately sold 3 motorcycles. Then 1905, Harley won the 15 km race in Chicago, attracting hundreds of thousands of motorcycle enthusiasts. In the same year, the company hired its first employee. A year later, the Harley-Davidson Company built a new manufacturing facility and hired five more people.

In 1909, Harley-Davidson introduced the first motorcycle with a V-shaped 2-cylinder engine – the 5-D (V-Twin). Its power was 7 hp, which was twice the power of single-cylinder engines.

In 1911, the “F-head” was produced – an improved version of the V-twin engine. Most of the motorcycles produced before 1929 were equipped with this particular engine. It received a mechanically controlled intake valve, and for checks, an improved gas distribution system almost doubled its capacity.

One of the reasons for the company’s success is the signed contract with the US military. In 1917, the country entered World War, and a third of all Harley-Davidson products had gone into the military.

In the meantime, the Harley-Davidson model line has evolved. In 1919, the Sport model was introduced, equipped with a 2-cylinder flat-valve engine with 6 hp. Its distinctive feature was the cylinder’s arrangement, which was located horizontally along with the frame on the same plane. The motorcycle was surprisingly quiet and enjoyed great popularity overseas.

After nearly 20 years of existence, Harley-Davidson became the largest motorcycle manufacturer in the world. Their models can be purchased in 67 countries. Motorcycles are valued for their reliability and advanced technology.

In 1922, the first models with a 1207 cc V-engine appeared: JD and FD. 1925 is the year of the appearance of the famous teardrop-shaped gas tank of Harley-Davidson motorcycles, which is their distinguishing feature.

In 1928, the public first saw the twin camshaft engine on the JD series motorcycles. Their maximum speed ranged from 128 to 160 km / h. Motorcycles were equipped with front brakes.

An essential moment in the history of Harley-Davidson came in 1929 when the V-engine was introduced on the Model D, which later became known as the “Flathead.” It turned out to be so reliable that it was installed on the brand’s motorcycles until the end of 1973.

In 1936, Harley-Davidson demonstrated the Model E, nicknamed the “Knucklehead.” She boasted a new 998 cc engine with top valves, as well as a circulating lubrication system, not “for burnout,” as before, but with a dry sump. A four-speed gearbox was located in a separate unit. The engine produced 37 hp. in the “base” and 40 hp – in the forced modification ES.

During the war, Harley-Davidson created many new models for the military, but the WLA was the most successful, with production reaching 90,000 units. The motorcycle was equipped with a 2-cylinder V-shaped lower valve engine with a volume of 739 ccs and 23 hp, paired with a 3-speed gearbox.

The WLA model was equipped with a machine gun stand, ammunition box, rear fasteners, tires with pronounced tread, two leather bags, a deep saddle with a central spring. On her tank were devices, including battery charging indicator lamps. The steering wheel was widened, with the handlebars bent back.

During World War II, under Lend-Lease, 25,000 Harley-Davidson WLAs were sent to the USSR. Although most motorcycles were destroyed, thousands of Harley motorcycles remained in the USSR after the war. They were used by the traffic police, partly – they settled at private owners. This is how the “Harley” subculture gradually emerged, which finally took shape in the mid-60s.

In 1946, Harley-Davidson introduced one of the world’s most successful racing motorcycles, the WR. 1957 is known for the release of the legendary Sportster. In the XL version, the motorcycle was equipped with an 883 cc engine with a capacity of 40 hp. After a while, the XLH version was released with an engine developing 47 hp. A lightweight version of the XLCH with a 55-horsepower engine accelerated the motorcycle to 180 km / h.

7. Harley-Davidson Sportster (in production since 1957)

In 1960, the Topper scooter was added to the model line, which received a fiberglass cladding and was equipped with a two-stroke engine with a horizontal cylinder. In the same year, the company buys out half of the shares in Aeronautica-Macchi, Europe. The company was in the production of motorcycles with a 1-cylinder engine for the local market.

1965 is the year of birth of another legend. Electra-Glide became the ancestor of the family of touring models of the brand and is considered the flagship. In the same year, the FL Electra-Glide and Sportster models received an electric starter.

8. Harley-Davidson Electra-Glide (in production since 1965)

1969 Harley-Davidson announces a merger with the American Machine and Foundry Company (AMF). A couple of years later, the first XR-750, a dirt track motorcycle, appeared. For the next 30 years, he remained the best in his class.

In 1977, Harley introduced the unique and highly acclaimed FXS Low Rider low-seat chopper, and two years later, the Fat Bob, which got its name from its shortened fenders and dual fuel tank.

The beginning of the 80s cannot be called the time of the company’s prosperity. Competition from Japanese motorcycles intensified, the country was in a fever of the fuel crisis, and Harley-Davidson sales plummeted. Leading managers felt that another reason for the brand’s failures was the AMF management’s policies that only cared about increasing profits. So they bought out the Harley-Davidson shares, making the brand it’s own again.

In 1983, the Harley-Davidson Motorcycle Owners’ Club, the Harley Owners Group, was founded. In just 6 years of existence, the number of its participants has grown to 90 thousand people.

An important year in the development of Harley-Davidson engines was 1983 when the new Evolution 1340 cc engine was released. They were equipped with five models, including the new Softail.

In late 1985, following the retro fashion, Harley-Davidson introduced the Heritage Softail with a 50s-inspired design. In 1988, the Springer Softail was fitted with a lever-type front fork reminiscent of motorcycles built from 1907 to 1949.

9. Harley-Davidson Heritage Softail (in production since 1985)

In the 90s, the company focused on improving existing models but did not forget about new items. At the end of 1990, a new family of motorcycles, Dyna Glide, appeared, characterized by a sporty appearance. These motorcycles were equipped with a large 1338 cc engine. Since 1994, they have received a fuel injection system, and in 1998 – a new engine, “Twin Cam ” with a volume of 1449 cc. The motor’s design provided for an individual camshaft for all cylinders, and there were only valves in its heads. Since 1999, the modification of the motor has been used on motorcycles of the Softail family.

In 2001, another legend was born, created in conjunction with Porsche. The VRSCA V-Rod model is equipped with a 2-cylinder V-shaped engine with a volume of 1130 cc. and 115 hp. It received a liquid cooling system, a fuel injection system, two overhead camshafts, and four valves in each head. The motorcycle’s design is dominated by the original design of the tubular frame and the original style.

In 2005, the first independent Harley-Davidson dealers began operating. Then 2010, the company officially entered the market, and a year later, its official representative office began to function.

In 2013, Harley-Davidson revamped the touring motorcycle platform as part of the Rushmore project, making them more comfortable.

The motorcycle maker is currently working on the first electric bike, the LiveWire, conceptualized in mid-2014.

Today there are seven main lines of motorcycles in the model range of the brand. Some are more affordable and more classic-oriented, while others are addressed to young consumers who are not so close to the image of the classic American motorcycle and who want something more modern and stylish. And, for example, the Touring family is severely heavy equipment for long trips and travel, with wind protection and voluminous luggage cases.

Harley- Davidson is not just transportation; it is a lifestyle. Today, a huge number of things are sold under this brand. Clothes, shoes, furniture, decor items, and even plates and cups are not a complete list of brand fans hunting for.

By the way, the black leather biker jacket, decorated with rivets, lettering, embroidery, and anything else, is a feature that H- D marketers introduced. With their easy presentation, the biker’s image as a cool motorcyclist in a leather jacket has been firmly entrenched in the minds of many generations. There is even a rumor that representatives of Harleys in the 90s collaborated with tattoo parlors to advise them to “label” themselves with company logos if the client wanted to look cool. They also stimulated the emergence and development of the official fan club H. O. G. or Harley Owners Group in 1983. Today, there are over a million people from all over the world, and its main function is to support the demand for motorcycles and hold thematic events to expand the audience.

The signature sound of the Harley-Davidson engine also became the object of attention. For years, the brand has tried to patent the engine roar as a trademark. Previously, such a trick was done by the manufacturer of lighters Zippo, registering a unique click. But this was perhaps Harley’s only failed campaign. After six years of battling patent offices, marketers gave up.

Today, a huge corporation, Harley- Davidson, continues to belong to Harley and Davidson. The founders’ descendants support the cause out of respect for the family business and continue developing new models and reconstructing old ones personally.

To complete the impressions and realize the real power of Harley-Davidson, it remains only to ride their motorcycle along the deserted American roads with a breeze. Company American Butler will be recognized, and such a dream!