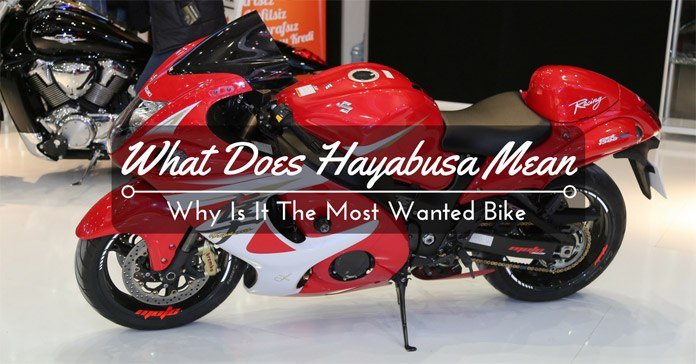 Hayabusa is a word that refers to either the unmanned spacecraft that was launched in 2003 in Japan or to the world’s fastest production motorcycle line made by Suzuki Cycles. So what does Hayabusa mean?

What Does Hayabusa Mean?

The Word “Hayabusa” is Japanese for “Peregrine Falcon”. Just like its namesake, Hayabusa is renowned for cutting through the air with extraordinary agility and performance. The Hayabusa motorcycle was designed to eat” the Honda Blackbird the same way peregrine falcons eat blackbirds.

The company had an ambitious plan to beat the speed of the Honda Blackbird. In 2000, Suzuki’s GSX133R model reached the top speed of 190 (298 km) miles per hour. Suzuki was headed in the right direction.

In 2000 European motorcycle makers, out of perceived competition fears and market domination by Japanese bikes, threatened to impose a ban against Japanese motorbikes. This lead to an informal agreement between Japanese and European bike manufacturers to regulate the top speeds of their motorcycles to an arbitrary limit.

According to media reports, they unanimously agreed to stick to 186 miles per hour or 300 kilometers per hour. In 2001, Suzuki Cycles limited Hayabusa’s top speed to 186 mph.

What Makes A Hayabusa Motorcycle Stand Out?

It combines massive thrust, unparalleled maneuverability, along with a silky smooth ride on city streets or even the open road. Underneath its windswept style beats the well-known Suzuki Hayabusa engine. The resonating feel of pure power elicits an attitude of striking authority from both rider and machine

Through various engineering refinements in the original design and style, the Hayabusa spirit has endured. Its superb performance delivers a sporty and fun ride at virtually any speed, defining the ultimate sports bike and setting the bar high for competitors. The radically unique yet timeless design also reflects the spirit of its owner.

Apart from its incredible feats in speed, the Hayabusa has received critical acclaim for its all-around performance. It does not severely compromise other bike qualities like comfort, noise, reliability, and handling. Here’s what makes it stand out:

The improved aerodynamics have improved its external appearance. The front fairing supports its vertically hosted headlight and lens indicators. The full and long visor enhances its front facade with integrated dark colored rear-view mirrors. The printed graphics on the front fairing add aggressiveness to the bike.

Immediately, below the headlight, Suzuki has put a full front fender which entirely conceals its front forks. There are two air inlets on the side fairing printed with the Suzuki name. The fuel tank is neatly-designed to give a premium touch. The elegantly designed seat enhances the rear design.

The bike comes with a partly dark colored silencer with a diamond-like coating. Popping up at the rear are round-shaped LED tail lights and upraised indicators that add to the beautiful look of its rear tire.

The Hayabusa does 0 – 100km/hr in under 3 seconds. It is engineered to zoom with a blast. This particular variant comes with a reduced weight giving it a high power to weight ratio. The top speed is 299 km/hr. Its six-speed gearbox requires very little effort to leap to 150 km/hr.

The refined engine is unparalleled with regards to power and delivery. To monitor engine performance, Suzuki has equipped the Hayabusa with a drive mode selector. It also features a dual valve throttle which evokes rocket behavior. The engine packs sufficient torque and power to frighten away even its closest rival.

Suzuki has linked this excellent engine to a manual gearbox with a six-gear configuration, which works with one gear downwards and the other gears in the up-shift pattern.

The engine complies with emissions requirements thanks to the Suzuki Pulsed-secondary Air-injection (PAIR) system and low-restriction catalyst found inside the exhaust.

Considering that the rev limiter was designed to cut out at 186 mph on stock gearing, this number stands in the top velocity of the bike. It is not only fast but quick as well; it reportedly comes out of the hole like a scalded dog in a 9.7-second quarter-mile time at 148.8 mph and explodes from 0 to 60 in a mere 2.6 seconds.

Power is delivered to the six-speed gearbox through the Suzuki Clutch Assist System (SCAS) that limits back torque and rear wheel hops when you are in a hurry and really need to scrub off some speed.

The instrument panel houses up to five buttons with all the important LED indicators. Hayabusa has an analog tachometer, fuel and temperature gauge.The bike has both analog and digital speedometers that are designed to look quite funky. The orange hue LCD displays the odometer and trip meter.

The Hayabusa is light and quite responsive when handling. It is impressive when in motion and quite stable on the track. It grips the asphalt perfectly with the wide tires and superior suspension system. Thanks to its revised brakes, you will never have to worry about losing control.

It has a respectable clearance of 120 mm which guarantees you more stability when riding at high speed. When cruising around sharp corners, you can rely on the extended wheelbase of 1500mm, which should you confidence to turn at high speeds. The Hayabusa remains low as you try to maneuver sharp corners at high speeds.

The Suzuki Hayabusa is sold at a price range of Usd 6,000 to Usd 15,000. This is just above entry level budget, just good enough given the speed and power involved. The models come in 3 different colors: Pearl Glacier White, Glass Sparkle Black and Pearl Vigor Blue

For People Looking To Own A Hayabusa Motorcycle

Buying a Hayabusa motorcycle will make you stand out among motorcycle enthusiasts as a person with a refined taste for good quality. Many biking enthusiasts consider the Hayabusa the best motorcycle ever made. It has won almost every superbike race and remains a hot commodity on the resale bike market.

If you feel the ability of a motorbike to approach 190 mph or attain the quarter-mile in under 10 seconds is at best frivolous and at worst offensive, this particular bike is still worth consideration. The Hayabusa’s glory is its speed. The steering is incredibly sharp, and the engine can whip up a whopping 175 bhp.

Put another way, it’s the king of the streets. Before shopping for other bikes, new riders should attempt a Hayabusa test ride.

1 thought on “What Does Hayabusa Mean? Why Is It The Most Wanted Bike?”