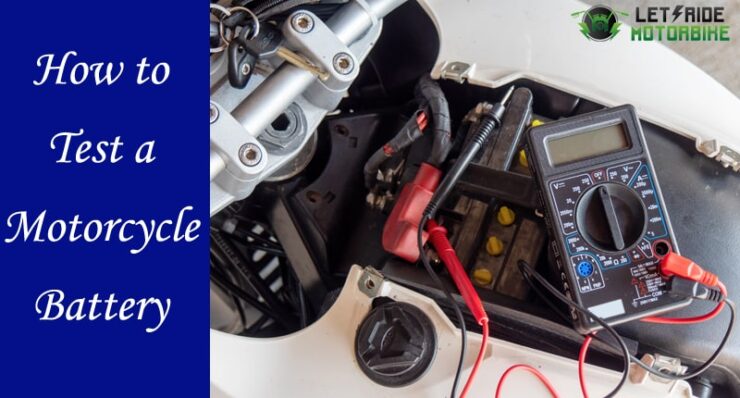 A good rule of thumb is if your reading on the meter shows over 12 volts then you’re all good. If you’re not sure how to do this yourself don’t worry – we’ll teach you right now. This blog post will teach you how to test a motorcycle battery so that you know when it’s time for a replacement or if it just needs charging up again.

How to Check a Motorcycle Battery

Checking the motorcycle battery is an important step in ensuring your bike stays running smoothly. If you’re not sure how to check it, here are a few tips and steps to help get you started. Let’s see the steps to check a motorcycle battery, along with several tips.

Make sure it’s a battery issue

Are you resting your motorcycle in its stand or on its kickstand? Have you engaged the clutch? Is the gear in neutral? In many cases, electrical switches on modern motorcycles prevent the vehicle from starting unless certain conditions are met. Does the motorcycle key point in the direction of on? It is not a battery problem, but it will mimic the symptoms of a dead battery.

Check that the motorcycle battery is the problem

A starting problem isn’t simply described as not working in mechanics. Starting problems are usually caused by a non-spinning or non-starting engine. There is no problem with the battery if the starter seems to be turning the engine at the correct speed. Despite the complexity of your motorcycle’s electrical system, it’s relatively simple in terms of the starting mechanism. If your motorcycle won’t start, a bad battery may be the cause. Below are some signs that a bike battery needs to be replaced.

If you turn on your motorcycle’s light and stand in front of it, you can check whether it’s working. The dim, dim headlight on your machine is an excellent indication that it is not able to start. Modern bikes often have a circuit that will only allow them to turn on the headlight after they are started, so this test will not be applicable.

How to Check a Motorcycle Battery With a Multimeter

From what I know, and I hope someone will correct me in the comments if I’m wrong, you can do the same tests with a multimeter as you do with a battery tester . Batteries need both voltage and current, and testing voltage is easy – everything you need is a multimeter.

In fact, here are the simple instructions to check the battery charge of the motorcycle with a multimeter . They are much less complicated and safe than using a battery tester.

Use a multimeter to check the battery voltage before starting the motorcycle , static test. Plug the leads into the multimeter. The black wire will go to the port that says “COM” (common) and the red wire will connect to the port that has a “V” (voltage). Turn on the multimeter in the 20 V DC section of the scale. If you have an automatic changeover meter, just go to DC voltage because you won’t have a scale. With the motorcycle completely off, touch the negative of the battery with the black test lead, and with the red cable touch the positive terminal. Record the voltage. The multimeter should indicate that the battery is above 12.6V or so.

Keep in mind that most people will stop here. They will probably find that your battery is dead. You can try charging the battery, possibly with good results, or maybe you should consider changing the motorcycle battery if it fails the voltage test at startup.

Next, to check the battery charge, start the bike with the multimeter test leads still connected to the battery terminals. You can connect them with alligator clips or have someone hold the ends.

You can run a test with the battery under load (running) to get an idea of ​​the current flowing through it. Note that this is not the “correct” way to do it, but it is another clue that will help you confirm or deny battery health. Hook up your multimeter the same way you did for the stationary voltage test, and have a helper press the starter. As the starter turns, watch the voltage . The starter motor should run at normal speed. A good battery shouldn’t drop below 9.6 volts for 10 seconds or so.

If the battery drops to 9.5 volts, that’s bad and the battery probably needs to be replaced.

If you have a load tester, now is the time to use it. Conducting actual tests depends on the type of tester. What we are about to see holds true for standard lead-acid and AGM batteries. Batteries of other types may have different test procedures and specifications, lithium batteries have a different test scenario.

At some point during these tests, you are likely to discover a problem. Insufficient current may be flowing to the starter, or the cables to the battery may be broken. If you know how to do it, a voltage drop test should be the next test you run. Don’t overlook relays, switches, cables, and solenoids. A parasitic drain can also be the cause of the faulty battery.

The use of a voltmeter for testing a motorcycle battery is relatively straightforward, and it provides you with a basic picture of how the battery is performing. You can learn a lot from this static test method. The condition of a motorcycle’s battery can be accurately determined by running it through a load test, which applies the lighting and ignition systems to the battery. Unlike a static test, this procedure won’t be overly complicated, but the results could help resolve future problems.

How to know if a motorcycle battery is damaged?

When temperatures drop, it is a classic phenomenon that our motorcycle batteries drop in performance. Since the starter motor isn’t powerful enough to turn the starter, it cannot overcome the first turns of the engine before starting. If a motorcycle battery exhibits any of the following symptoms, it might be having problems.

These problems are symptoms that our battery is in poor condition, it could even be unable to be recovered, or it might last only for one or two days or not even start at all. A rechargeable battery might prove more convenient at this point, or in the worst case, it might be necessary to replace it.

How do I know if my motorcycle battery is bad?

An inspection of the visual environment is the most straightforward method for locating warning signs. Broken terminals, cracks or bulges in the plastic case, fluid leaks, and discoloration are signs of a bad battery.

What is the average lifespan of a motorcycle battery?

The typical life expectancy of an Absorbed Glass Mat (AGM) battery is between 3 and 5 years, according to Motor Gear Expert. Battery life is 2 to 5 years for an acid-filled battery.

Why do motorcycle batteries die so fast?

Motorcycle batteries are too often killed by neglect when they are young. Dehydration, improper charging, and slow discharge shorten the life of batteries. In order to prevent this death from occurring, you should disconnect your battery when it is not being used.

Will a motorcycle run with a bad battery?

Are you still able to ride your motorbike if your battery going to die? Usually, yes. Your motorcycle can still be driven as long as its battery is still able to start.

Does a motorcycle battery charge while idling?

Despite not providing as much power as when the motorcycle is traveling at high speeds, a motorcycle battery can charge while idling. Motorcycles provide about 13, 14, or 15amps while they are running, whereas when they are at idle they provide less than 1amp.

One of the most common issues with motorcycles is a dead battery. A motorcycle won’t start if its battery is dead, and it can be difficult to know whether or not your bike’s electrical system has enough juice for you to ride off into the sunset. Testing your motorcycle battery can be an intimidating task, but it doesn’t have to be. If you follow these simple steps above about how to test a motorcycle battery, the process will go smoothly and quickly. Of course, all batteries wear down over time due to normal use but these quick tests will help save you from being stranded with a dead battery in the middle of nowhere.