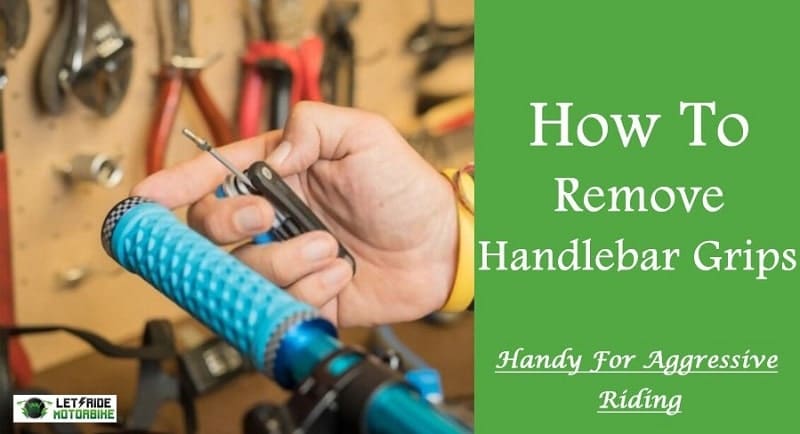 Hand grips are handles that are put on the handlebars of bicycles, at the edges, where we hold on to them with our hands. When you buy a bicycle, it already has “native” grips. But unfortunately it often happens that the handlebar grips do not meet our needs. They may not be the right shape, too hard or for any other reason. If you have seen a handlebar grip that suits your personality and you have bought it, now the question is: how to remove handlebar grips?

Hand grips on bicycle handlebars come in different types and made of different materials. The most popular that are sold with the bike are simple rubber grips. There are also foam grips. Grip grips with clips – will be handy for aggressive riding for a better grip on the handlebars.

Removing the foam grips from the handlebars of the bike is no problem, just take them and pull them off. To remove the grips with clips you need to loosen by unscrewing the clips then they are removed easily enough as foam grips. To remove the rubber grips from the handlebar, you need to apply a little trick, because the rubber can stick firmly to the metal handlebar, and there can be problems with the removal.

To easily remove the grip from the handlebars, we need to wet it inside. You can do this in several ways, for example you can gently pry the rubber grip with a small flat screwdriver or a spoke and pour water under the grip.

Beautiful grips for a bicycle

After the grips are removed, we need to put on new or the same. To put the grips on the handlebars of the bicycle, you need to moisten them inside with water or alcohol, and slowly pull them on the handlebars. Alcohol is convenient to moisten because it evaporates faster than water, and while under the grips will be water, the handlebar will easily scroll, which is not convenient when riding a bicycle. There is another way to put on the grips – by warming them in hot water, but it is worth remembering about the safety precautions. Since the grips will be hot, it is necessary to do it with gloves, so as not to bind.

How do I remove the rubber grips from a snowmobile handlebar?

You may need to remove the grips from the handlebars to replace them or to install the heated handlebars. In the first case, if the handlebar grips are not needed, you can simply cut them off with a knife. If, however, the grips are still needed for future use, then we recommend reading this article.

There is usually no adhesive composition under the rubber of the grips. They are held by the tight fit and the friction that occurs when the palms of your hands squeeze the handles. To remove the grips from the handlebars, you can use one of the suggested ways. Pulling the grips off the handlebars with your hands is the easiest, but usually not effective way.

Deflate the rubber handlebar grips with a powerful compressor. There are two methods in this method:

The most effective way to remove rubber grips from a handlebar is as follows:

In order to put the rubber grips on the handlebar, you should lubricate the seating surfaces of the handlebar and the handles with water or alcohol or soap solution, which will ensure sliding. Alcohol is preferred because it evaporates faster than water. Soap solution takes much longer to dry, but gives more glide, and after drying, it slightly attaches the handlebar rubber to the handlebars. However, to dry the soap solution, you need to heat the handlebar with a handlebar warmer or other method. Also, the handlebar can be put on by pushing it on the seat and feeding a powerful jet of air from a compressor into the central hole. In this case, the handlebar is accompanied by a hand and it is very easy to put it in place.

Indeed, some grips have a very narrow seat size, so much so that it is quite a painful task to put them on and take them off.

It’s relatively easy to install: you take a bit of soapy water and wipe the handlebar ends. With soap the grip glides on its rightful place, after a few hours the water dries, everything is great.

But what to do when such malicious grips have to be removed – you may need it, for example, when you change brake grips or shifters. If you do it the standard way, i.e. you pull them off with your hands and some mother, it’s an unforgettable experience.

You should remember taking the stock rubber grips off a hybrid to put long horns in the center of the handlebars, Italian style. These seemingly decent Ritchey grips made me remember every foul language I had ever heard. As it turns out, there is a more elegant solution that has helped me in subsequent operations on this subject.

So, to remove the grips quickly and easily, you again need soapy water and any syringe. We fill the water, drive the needle between the metal and rubber, and make the injection. After this injection the recalcitrant grip comes off the handlebars. I’ve heard that some people used oil or wd40 instead of soap, but in my opinion, it is not quite correct – oil can soak into the grip material, and then it will scroll.

Option number two is a bit messier. You need to get the bike into the kitchen or bathroom, and put the handlebar under hot water. Once it heats up, it will pull off the handlebars easily enough.

Probably more experienced cyclists are well aware of this procedure (or on the contrary, have not encountered the problem at all), but beginners may well benefit from this trick.

Sometimes it is necessary to remove the old handles and put on new ones, for example, in the case of replacement for heated handles. Due to normal human qualities, even when installing new handles, you would like to keep the old ones, perhaps they will be useful somewhere. There are two ways. Of course, they do not give a 100% guarantee, especially if the handles are glued with a very strong glue. The only tool you need is a long and thin rod. A wooden stick (or a paintbrush handle), as in the photo, will do.

The method is extremely simple. Gently push the wand under the handle as far as it will go. If the handle is heavily glued, then gently separate it from the handlebars by driving the wand along the circumference. As soon as the handle is free, we insert the stick (as on the photo) and blow air in it. Eventually, the handle should blow up enough to pull it off the handlebars.

If you don’t have a compressor, you need to use something to lubricate it, like soapy water. Again using a wooden stick to disconnect the handlebar from the handlebar. There are several ways to remove the old handgrips.

Cutting off the old handgrips 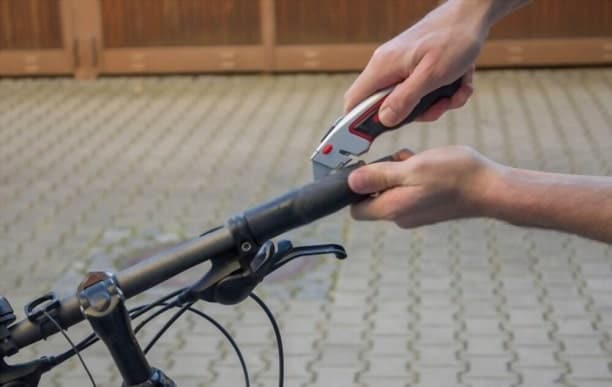 If you need the handlebar grip in the future, for example if you just need to change the shifting levers or brake levers, you have to take it off so as not to damage it. If you can’t just twist it, try using a WD-type lubricant with a spout and a screwdriver, preferably a thin screwdriver. Put the screwdriver between the metal of the handlebar and the grip as deep as possible and, inserting the tube with the WD-tube into the gap you created, spray the lubricant inside. This should be done in 3-4 places, preferably on each side of the grip. If the handlebars without the end face and you can get under the end side of the handlebar do the same there. Spray a little grease under the grip to remove it. After that, try to twist the grip off the handlebar.

Yes, it is also very important that you wipe the handlebar dry after taking off the grip. Otherwise the remaining grease will remain on the handlebar and the new handlebar will slip and twist under it.

You can do the same operation as described above with a syringe and a needle. You need to pierce the handlebar and inject soapy water or liquid oil under its material. This should also be done in different places. After this grips will be much easier to twist and remove from the handlebars. To use this method with a plastic or leather handle is more difficult, but you can inject the grease from the ends of the handles, and the leather try to slip the needle into the sewn seam.

You should note this, about the use of oil. You have to be creative about it. The material of the handlebars should not absorb oil, otherwise it will constantly scroll on the handlebars.

One more method, but it is a bit complicated and not suitable for all types of grips. You can try pouring boiling water or very hot water on the handlebars and wait a while. Then it will expand a bit and come off the handlebar a bit easier. Again, when removing it, twist the grip slightly along the handlebar axis.

After some time of use, especially if at least a couple of years have passed, the grips are not easy to remove from the handlebars. It is as if they “stick” to the metal surface. In this case it is not possible to pull the handlebar off. In general, a good handlebar grip is unlikely to be pulled off by applying force only along the handlebar. It has to sit firmly on the handlebar and not to twist.If the handlebar grip is fixed with locks (fixing rings), of course you have to remove them first. Unfortunately, there are cases when the screws are so “stuck” on them that it becomes very difficult to unscrew them. Sometimes it gets to the point that you have to simply cut them off with a hacksaw or file. The best way is to twist it with rotary movements around the axis of the rudder and pull it to the edge at the same time.