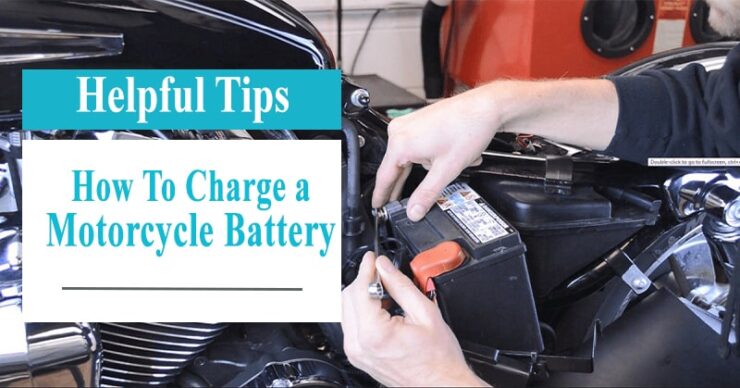 There are many repairs and maintenance that require a skilled mechanic and specialized tools to run smoothly. But there are other things we can do on our own and in the comfort of our home. In this sense, here you will learn how to charge a motorcycle battery in just 5 simple steps . Since this is one of those things that does not require expert hands, with which you save money from the workshop at the same time that you are gaining autonomy with your motorcycle.

Why charge a battery before throwing it away?

Most likely, you came to this post after noticing that your motorcycle won’t start . In the network you found that the battery is most likely dead . But it may be that your inexperience with motorcycles is so much that you did not even take into account that they work with batteries that sooner or later discharge.

Well, now that you know that you don’t have to worry. If you use your motorcycle regularly, you will have no problem charging the battery again . However, if you had it lying in the garage for several months without turning it on, there is a great possibility that the internal plates of the battery have become sulphated from disuse, so your only possible solution would be to buy a new battery. .

Essential consideration: Never forget to check the charge levels of your motorcycle even if you have it stopped. Charging it as often as necessary will allow you to enjoy it for much longer.

In the same way, you must consider that batteries cannot be charged an infinity of times , but over time their recharging capacity is reduced due to the continuous deterioration of their internal components. However, charge a motorcycle battery and carry out its proper maintenance regularly; it will greatly increase the useful life of it.

Lastly, consider that batteries cannot be recharged directly from the power outlet . There are devices specially designed to perform this task. Also, depending on the model of the motorcycle; Some batteries will need to be charged after removal, while others can be charged without removing them from the motorcycle.

Equipment needed to charge a battery:

5 Steps to charge the motorcycle battery

Step 1: Identify the position of the battery

Using the motorcycle manual, identify where the battery is located . Not all of them have it in the same place, but they usually have it more or less in the lower area of ​​the chassis, under the tank or to one side of it.

In this regard, sports bikes are usually the most tedious, because they often have the chassis covered with the fairing that you must remove.

Step 2: Disconnect the battery from the motorcycle

IMPORTANT! Having the battery on hand, it is advisable to take advantage of it to do its full maintenance. It may need to be refilled with distilled water in case of a conventional battery or that its terminals need to be cleaned in case of a sealed battery.

In case your motorcycle has the battery very hidden, it is likely that it has a kind of external lighters from which you can charge the battery without having to remove it or disconnect anything . This you can confirm in the manual.

If your motorcycle does not have these lighters, but still removing the battery is a real headache, you can still charge it without removing it. Only, surely; You will have to work in awkward positions.

In the latter case, the recommendation is to leave the charging wiring permanently installed on your motorcycle , for which you will need to buy some connectors, fuses and fuse holders (consult an electrician and use weatherproof cables). By doing this, you will only have to connect the charger to said pre-installed cable, it would be something very similar to the lighters that come from the factory in motorcycles such as BMWs.

Finally, you must connect the charger / maintainer to the battery (first the red cable with the positive terminal and then the black cable with the negative terminal). Then, connect the device to the power outlet and make sure that the charge intensity is not greater than 10% of the battery capacity . For example: a 12 V and 75 Ah (Amp-hour) battery must be charged with a current of 7.5 amps.

Step 4: Reconnect the battery to the bike

Until the previous step, the battery should already be charged and ready to use. But reconnecting it to the motorcycle will vary from one case to another , depending on whether in your case you are working with the battery mounted or removed.

If you disassembled it, remember to put it well in its place, adjust its screws and its insurance strap if it has it. When connecting it, put the positive cable first and then the negative cable (contrary to how it is done when disconnecting it).

If, in addition to the starting system, your motorcycle has other electronic functions such as alarms, heated grips and headlights; It is highly recommended that you take a test ride and check if all the indicators work correctly before embarking on the road.

How to know when to charge a motorcycle battery?

The right time to charge a motorcycle battery is not when it discharges to the point where the machine stops turning on. On the contrary, at that point the battery wear is considerably higher than recommended . Pay attention to the following table and then I will explain what its values ​​mean.

NOTE: When the motorcycle will be standing for a long time, this is when its battery will need to be tested the most to ensure that its charge level remains stable.

It is best not to let the charge level drop below 60% , since after falling below that level each subsequent recharge will be less efficient. If it is at 0% it will be almost impossible to “revive” the battery. In any case, if after charging it does not reach a voltage of at least 12V, then it is time to buy a new battery.

How long does it take to charge a 12V motorcycle battery?

It depends a lot on the charger you use, one that is of an acceptable level can take between 8 to 10 hours if it is completely discharged

Is it good to do battery recharges?

Yes, in fact it is something that people often overlook but that undoubtedly helps to maintain it.

The terminal must be disconnected if the motorcycle is not used

It is recommended since if you do not do it you can cause the battery to discharge, even though it tends to discharge.